Last year, I had students keep a digital design journal (a Google Doc, one per group). I wanted them to record their progression of ideas and questions as they went through a design challenge. I asked them to include brainstorming, sketches, explanation of any decisions they made, test results, challenges, questions they’re trying to answer, etc.

I liked that students could add photos easily to the Google Doc, and that multiple group  members could work on it at the same time. But there were also some downsides. Students often didn’t finish it in class, so they would work on it outside of class. This was a problem because I really wanted it to be keeping track of their messy ideas in the moment. Instead, it was more like a post-hoc report of what happened in class. 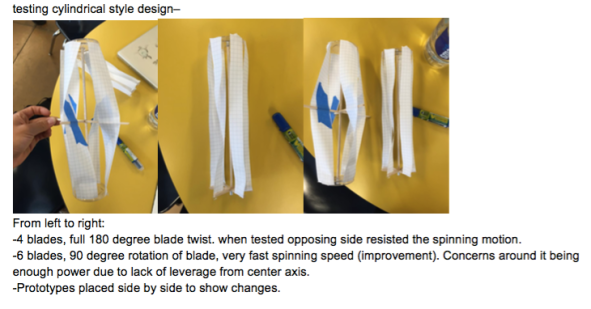 I also think the format made them feel like it should be more like a finished product – like an English paper – since you can edit things so easily in the Google Doc. It  also was hard to include all of their sketches – they had to decide that a sketch was important enough to take a picture of it and upload it (or some of them used SketchUp, which is nice but again, too formal) 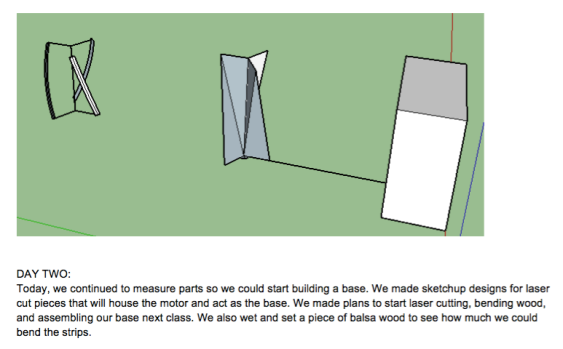 So this year I am trying physical design journals that they turn in at the end of class. So far I’m really liking it. They can’t work on it outside of class. They can sketch easily and pass the notebook around while they’re talking and showing each other their ideas. (A Google Doc on a laptop doesn’t really facilitate this easily, even if multiple people have the doc open). The thing I like the most about the physical journals is that they can be messy and annotate their diagrams more easily. Last year, they would include a hand-drawn diagram and talk about it in the text below, but I would have no idea exactly what part of the diagram they were referring to. 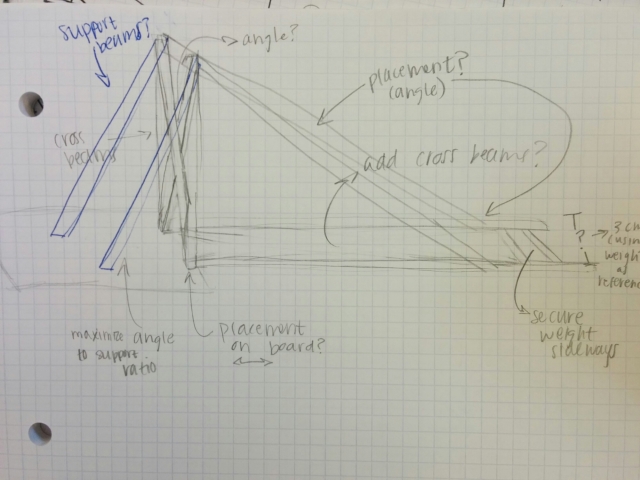 I have a vision for what I want these to look like, but am still working on articulating this vision. Instead of creating a rubric or checklist for the journals at the beginning of the project, instead I am using the in-process journals to help me determine and refine those guidelines. Each class, I show some examples of their journals each day and highlight what I like about them and what can be improved.

After showing examples of their first day journals, I said I liked the inclusion of lots of ideas, but I need to be able to follow the process of their thinking, so they should also include written description and point out specific things on their sketches that they’re describing. I also want them in include questions they have – like if they’re trying to decide between 2 alternatives, explain that.

I asked them to also include any results from testing, and this group decided to add a picture of where their cantilever broke when they tested it and explained how they will reinforce their next design.

This group does a nice job of annotating their sketches and explaining the support they will add next time and why:

Overall, I like how the quality of the journals has improved over the first 3 days of the project, but so far it feels a bit like me making arbitrary guidelines that they try to follow.  I want to talk more about the purpose of these journals. When/why do engineers in the real world use them? Do they go back and refer to previous days’ work? With a clear purpose, it would be easier for students to understand what to include and why.

I also want to shift toward having the students read each other’s journals and ask each other questions and give feedback. I think it would help them see when they they’re not being clear with their ideas if they heard from another student “I have no idea what you’re talking about here!” I’ll write another post after I try this.